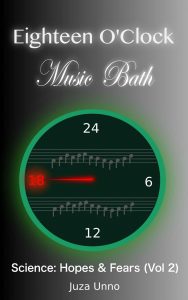 Locksleyu from Self Taught Japanese has released a new volume of Science: Hopes & Fears following a collection of short stories by Juza Unno. This second volume consists of a dystopian novella by the same author. Written in Japan in 1937, this is an early example of dystopian work that has previously never been translated into English. If you are a fan of novels such as Nineteen Eighty Four from George Orwell, then please pick up a digital copy of “Eighteen O’Clock Music Bath” and see Japan’s early contribution to the genre. I helped with translation checking and editing of this novella.

This story made me think of Mori Hiroshi’s W-series. I have only read the first three books so far:

The W-series and Unno’s work share a theme of androids threatening the status of humans. In the W-series, professor Hagiri does research on how to distinguish between naturally born humans and “walkalones” which are androids that have approached the point of being physically human, except that they are made in a factory. It turns out that the research about how to distinguish androids from humans has quite an overlap with how to make them totally indistinguishable. In Unno’s novella professor Kohak is doing android research using half of the entire national budget, and even though the president tries to put an end to the professor’s work, he may also be a bit too interested his creations.

The scale of each work is quite different. Mori’s books take a long time to develop the overarching plot, but have a climax and resolution in each book. “Eighteen O’Clock Music Bath” is full of shocking events  and delivers a complete story in a shorter format.

Anyone interested in pondering the implications of rapid advancements in AI and robotics may find something to send their minds into a spiral of both ominous and wonderful ideas about the future with either of these books.

None of the W-series books have been translated into English. “Eighteen O’Clock Music Bath” is now available in English, but the original, in Japanese, is available for free on Aozora Bunko. You can even find the audio for parts of the original on YouTube by searching for “18時音楽浴 朗読”.

The e-book in this article is no longer available, but the stories in the e-book and more are included in the newly released paperback version available here.

For more information, check out the post about the release at Self Taught Japanese: