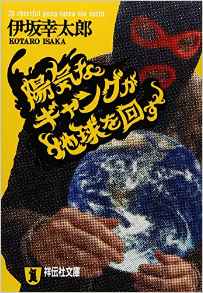 Dialogue makes up a large part of the book. At first it was hard for me to follow with the four main characters talking together. However you quickly get a feel for the characters’ personalities and can tell who is saying what based on that.

A character named Tanaka, who lives with his mom, can provide a key for any lock as well as license plates and night vision cameras. I’m interested in characters with these kinds of skills. He doesn’t have a huge role, but I read that Isaka reuses characters. Maybe he’ll show up somewhere else.

I like that the gang sticks together even through a betrayal, all while keeping a light mood. Also, it’s interesting seeing Kyono and Kuon stumble through how how adults can intervene in a middle school bullying situation and can’t just let it go.

It wasn’t too graphic or explicit and stays light and humorous through the entire novel. Great entertainment.

I review the second book in the series here.