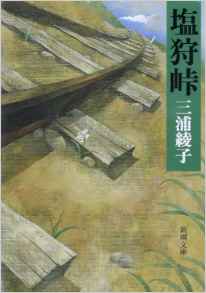 I don’t think I’m giving away too much by revealing the end of this story, because you find that information in the first two sentences of the Amazon description. Although this is a fictional story, it is written to promote awareness of a real life hero. Although not much is known or written about Nagano Masao, who gave his life to save a train full of people from a horrible wreck in 1909 in Hokkaido, Miura fleshes out his story in the life of Nagano Nobuo.

I have been interested in the thought process of someone who has always practiced reverence for their ancestors and then becomes a Christian. I would like to know how they process the drastic change in understanding of the nature of life and death. Nobuo is from a samurai family, and he is raised by his grandmother to despise the foreign religion of Christianity. Eventually he finds himself at a point in his life when all of the people most important to him are Christians and he himself becomes a passionate follower of Jesus.

Even though the thought process in moving from ancestor reverence to becoming a Christian is covered directly in the novel it wasn’t covered as thoroughly as I hoped, and I wonder if there is more to be found in Miura’s other works. Here is my translation of one particularly relevant quote from Nobuo’s fiancé Fujiko, which Nobuo takes to heart:

I think there is more to respecting your ancestors than putting your hands together in front of the butsudan. I think if you can live every day in a way that would please them, then that is the true way to give back to your ancestors.

I actually don’t understand this quote because I would think that Nobuo would want to live in a way that pleases Jesus in spite of the fact that his ancestors would despise his devotion. I can understand that his ancestors would be pleased with the fruit of the Spirit that Nobuo bears, but I would like to see more depth to how Nagano-san deals with this transition in thinking about ancestors.

I liked Nagano-san’s take on the good samaritan story. He wants to become a Christian, but thinks of himself as serious and relatively a good person. Even though he realizes he’s not perfect, he doesn’t feel that anything he has done would warrant Jesus’s death on the cross.

From a recommendation from a missionary he meets on the street, he tries carrying out one of Jesus’s commands completely. He tries to be the good Samaritan, from Jesus’s parable in Luke 10:25-37, to one of his co-workers. Eventually he finds that his shortcoming was in seeing himself as the good Samaritan instead of recognising that Jesus is the true good Samaritan, and he is actually the person dying by the side of the road. He comes to the understanding that his great sin is trying to put himself in the position of God.

In the end Nagano-san sacrifices himself for a train full of people. I can’t help but wonder if he could have found another way to stop the train. He saved many lives, and his heroism brought attention to his faith bringing a lot of people to come to know Jesus. However, for all the characters in the book that the reader knows, it is a great tragedy.

This book was very easy to read. It may be because the last couple of books  I read were written in early 1900s and this one was written in 1968, so the language is more modern. It may also be that Miura’s writing style is very clear.

One part of the language that I did have trouble with was quotes from the Bible. By comparing the texts with Bible translations found on this website, I found that the quotes are from the Taisho Kaiyaku translation. I can understand it just enough of it to know what passage is being referred to, but not enough to understand it in isolation. The grammar is quite different from the Japanese style I’m used to, however I’m not sure if it is really kobun. I considered getting a book to see if it would help, and I may try it out in the future.

Overall I found this book to be very interesting, and I will definitely read more from Miura. As someone raised in church and growing up in a country where it is hard not to hear the gospel, I had my own challenges in coming to follow Christ. One of those challenges was wondering how God’s plan could include so many people growing up somewhere where they may not hear the gospel, and if they did, it would be something completely foreign. It is interesting to hear the stories of people coming to know Christ where the gospel is coming from outside of their culture, and this is a very well written one of those stories.