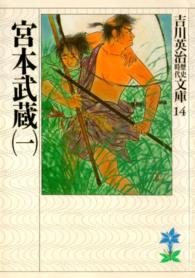 I picked up this book more than a decade ago, and I have tried reading it two or three times since then. Each time I couldn’t make it through the first chapter before giving up. It’s actually an epic novel and this is just the first of 8 books in this reprint. I finally read through the one book I own. The first book is a fictional account of the historical famous swordsman’s life starting at age 17 after the battle of Sekigahara to the point when he is a young man trying to find a worthy opponent to practice his mostly self taught martial art.

The language is challenging because of the grammar and vocabulary unique to historical fiction set in the early Edo period. For a typical Japanese learner I would suggest becoming very comfortable with stories set in modern times before tackling this book so you can know which aspects are unique to historical fiction. However, if samurais are the reason you are learning Japanese, then by all means jump right in.

I want talk about one part that was particularly challenging to me, and there will be spoilers as I explain the context. There are two letters written in Souroubun (候文), which is how letters were historically written in Japanese. I encountered this before in Endo Shusaku’s Chinmoku, and had no idea what it was. Since this is the second time I encountered this style of writing, I looked into a bit deeper and tried to get an idea of what was being written. I couldn’t find an online resource that covered enough for me to be confident in my understanding, but I was able to break down bits and pieces. I think buying a book on the subject may clear up the grammar more completely, but for now I did my best with what I had.

I’ll take one of the letters and write, not really a formal translation, but how I think of it in modern Japanese as I try to parse the letter. I don’t write in Japanese much at all, so I can’t promise it will be coherent. Finally I’ll follow up with what I think it means in English. The translations are based on a lot of guessing and referring to context. I have no background in souroubun or translation, so if you can improve either of my interpretations, then please leave a comment and I will improve them.

The letter was left by Aoki Tan, the samurai in charge of catching Takezo, (later named Musashi) who needed to be captured after he wasn’t killed after losing in the battle of Sekigahara. Tan was having a hard time and lost several men at Takezo‘s hands and finally let a monk named Takuan capture Takezo on the condition that Takuan could decide his fate. Takuan captured him and decided to tie him up in a tree until he was killed by exposure to the elements. However, Aoki Tan was called up by the daimyo at Himeji Castle to give a report of how things were going with the manhunt, and he really needed Takezo‘s head to show that he had been successful. He leaves a letter along with a valuable coin asking O-Tsu (who actually loves Takezo) to help him out.

Here is the original letter.

Here is my English translation.

As I said earlier, please secretly bring Takezo‘s head to Himeji Castle within the next few days. I believe you know how I feel about you. Not to brag, but all of the most elite samurai in Ikeda’s province know who you’re talking about when you mention Aoki Tan. You could become my wife, and the wife of a big landowning Samurai is quite an impressive position to be in. I swear to Yahata I’m telling the truth. You can keep this letter as proof. Again please be sure to take care of Takezo‘s head as soon as possible for your future husband.

Yoshikawa’s Yoshimoto Musashi was first published serially from 1935 to 1939 in the Asahi Shimbun according to the Wikipedia article. This story was intended as entertainment for the mass market and was well received. Each chapter is short, and something interesting happens in every chapter, so it’s faster paced than most novels I have read. A lot happens. I think it may have an image of being a deep and philosophical book since it is reference material for what it means to follow the way of the sword, but on the surface it is dramatic, exciting, and fun to read for at least the first eighth of the novel. I can imagine many Japanese people in the 1930’s eagerly anticipating the next installment in their morning papers.

The entire book is available in the public domain, so you can get it from Aozorabunko. I haven’t decided if I want to read the remaining 7/8ths of this novel yet. I will at least wait until my Japanese level has improved a bit before tackling the remainder, and I may reread this one first to pick up some of the details I missed.